Results from the Count

Edmonton has been continuously participating
​in this citizen science project   since 1955.
Edmonton holds the all-time record for number of participants!
And we're the Black-capped Chickadee capital of Canada.
Our World records:
PARTICIPATION World Record = 1288      (1987) Edmonton, AB
Boreal Owl = 8 in 2005
Black-billed Magpie = 3,447 in 2020
Bohemian Waxwing = 35,298 in 2005
Our   Canadian Records
Downy Woodpecker = 568 in 2015
Blue Jay = 1,598 in 1988
Black-capped Chickadee = 6,239 in 2003
Note:    Canadian and World record updates become available in the following  year’s report.
The Audubon website allows you to  search for  results by year and for any specific count including Edmonton.   Historical Results ​
Audubon Count Year #123 for December 2022 and January 2023
2022 Edmonton  Christmas  Bird Count   Final Results
​Edmonton's Count was held Sunday, December 18th, 2022. The weather was a bit challenging; both birds and bush beaters spent time sheltering from the cold, snowy       conditions! Zone captains organized folks to survey their zones with less time  spent walking, and more  time than usual driving during surveys.   The temperature hovered around minus 20 and   the overcast, snowy day didn't provide the best visibility. Photos provided by participants reflect the conditions they experienced,  however, thanks to everyone's efforts, we had another successful count and recorded only  one less species than last year!
Highlights for December 18, 2022:
Also notable:​
Count historian, Geoff Holroyd notes that our participation numbers remain strong, and far beyond those of any other count. We hope to maintain this  tradition for Edmonton! Thanks to everyone who participates!  Geoff also notes that our number of species has hovered just under 50 for several years. Can we push through to the 50 species mark?
File with details of all zone specific numbers   2022.dec.18.results.by.zone.xlsx
Report from last year VIEW HERE 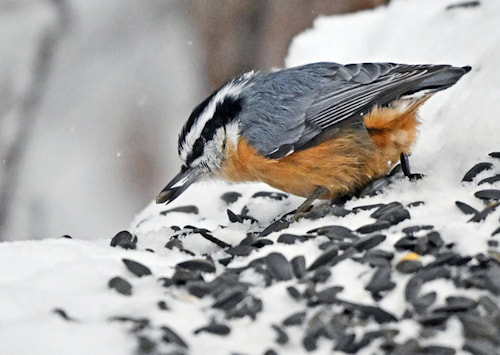